How We Raised Over £4K for Jamie’s Journie

Million Dollar Fitness has raised over £4000 in an amazing month of fundraising for Jamie’s Journie.

To celebrate the first anniversary of moving to bigger and improved premises on Bond’s Hill, Dee McCahill of Million Dollar Fitness wanted to give something back to the community.

Jamie is 16 years old and has beaten cancer twice. His idea for Jamie’s Journie was to create a support group for families affected by childhood cancer in the North West.

Dee explained, “I asked members to nominate local causes and we were introduced to Jamie’s mum Trisha. We realised that – by teaming up with Jamie’s Journie – every one of the children nominated would benefit instead of just one child. How can you choose one over another? Jamie’s Journie provides support as and when it is needed most, and 100% of donations go to the families of children and young people affected by cancer. It’s amazing”.

To launch the fundraising campaign, over 40 people took part in a sponsored Errigal Climb, raising £1290. First to the top was 13-year-old Oisin Connolly. Despite the wind, climbers celebrated reaching the summit by performing extreme burpees. Jamie wasn’t well enough to be there but his parents greeted climbers as they returned to basecamp and were overwhelmed by the support.

But that was only the start.

Members of Million Dollar Fitness took part in a Pledge My Pounds Challenge – for every pound in weight lost, Dee donated £1 and members pledged forfeits also. This has raised over £700 so far, with more still to be collected. Even though most of the girls hit their weight loss targets, they still donated their forfeit.

A Hallowe’en Coffee Morning seemed like an unlikely event to be held in a fitness facility, but #teammilliondollar baked and donated an amazing spread of cakes and treats, raising £425 in donations alone. Of course, it was fancy dress and, as you would expect from the Hallowe’en capital of the world, costumes were amazing. Face painting and a bouncy castle entertained the children. Jamie and his family were on a much-needed respite weekend but were represented by little Kari Barrett in her superhero costume.

The draw for the Awesome Raffle also took place at the Coffee Morning. Over 20 prizes were donated by local businesses and ticket sales raised £1455.

With donations still being handed in, the total is yet to be calculated.

“I’ve seen some amazing things in my years of travelling around the world but NEVER have I experienced anything like the overwhelming support shown here in this community. Average folk from all walks of life, pulling together to help others less fortunate,” said Dee McCahill.

“Everybody has their struggles and we all deal with things differently but one act of kindness – no matter how small – can make a huge impact on another person’s life. Meeting Jamie, a 16 year old boy who’s battled Cancer twice has really put my own things into perspective and I have to say, I’ve learned an important lesson from all of this – don’t sweat the small stuff.”

You can read more on Facebook or visit www.milliondollartrainer.com/supporting-jamies-journie 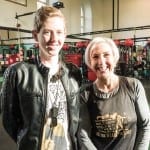 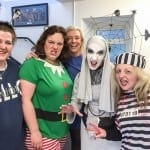 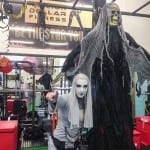 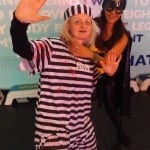 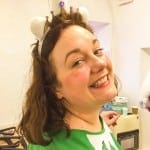 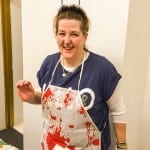 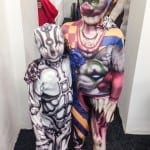 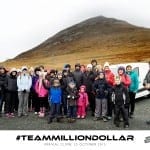 Notes to the Editor: