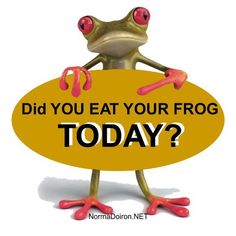 First off I just want to acknowledge the attack on Paris last night – It’s truly heart breaking to hear the news coming through.

There’s an old saying that say’s “If the first thing you do when you wake up in the morning is eat a live frog,
then nothing worse can happen for the rest of the day!”

I don’t know about you , but I think that’s a pretty safe assumption.

In the book Eat That Frog, the guy that wrote it (Brian Tracy) say’s that your “frog” should be the most difficult item on your to do list – the one where you’re most likely to procrastinate, because if you eat that first it’ll give you energy and motivation for the rest of the day.

On the other hand …. if you let that big old frog sit there on the plate staring at you while you do a hundred unimportant things – that fecker will drain your energy and you won’t even know it

So I’m throwing out a Challenge to YOU – for the next 30 Days, take a look at your list, circle the frog and Eat That First.

You’ll thank me for it 🙂

Today’s RAK was another kind of fundraising pledge.
I was talking to Jamie’s Mum and Dad today (of Jamie’s Journie) about the fundraising we’ve been doing and they couldn’t get over the amount that #teammilliondollar raised throughout October
Did I tell you the total amount raised was £5000?????
I was in tears when I got the final count.
UNBELIEVABLE.
But then, the guys and girls at Million Dollar are unbelievable.
Scrap that – they’re AWESOME

So I got to thinking about what else I could do to continue to raise money and support the work that Jamie’s Journie does and then I thought about a cookbook.
I haven’t launched any new cookbooks (Cookbooks link) in a while so I’m going to get thinking cap on and create a Winter Warmers Cookbook. The Winter Warmers Cookbook will be available as a digital download but I’ll let you know when it’s ready to rock.

Have a lovely evening
Dee